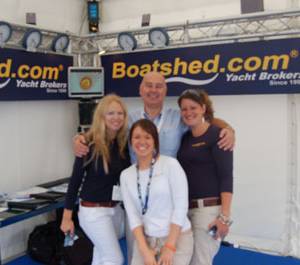 Frank and the Boatshed Babes

Frank Gelder from Boatshed Cowes has been bestowed with the highly-sought after "Boatshed Most Cuddly Broker" award following the recent Southampton Boatshow.

Every day, Frank manned the Boatshed stand, bravely fighting off the women who all came to see for themselves how this bastion of modern man came to be honoured with such a title. Never has one man done so much for the female visitor to Southampton than Frank. And the only way to thank such a great man, is of course to give him another title to add to his wall of medals, trophies and certificates. Frank - we salute you!

Boatshed Cowes will be officially launching and having a party in the next few weeks so watch this space (plus Frank might have competition for his title but we will of course keep you updated in every twist and turn of this gripping story!)

During the show, the extended Boatshed team from all over the world (41 offices at the last count) chatted, poured champagne, demonstrated the website and generally flew the flag. Each of the brokers were on hand to talk boats and a lot of talking was done - certainly from five o'clock each night once the Fizz @ Five got underway! 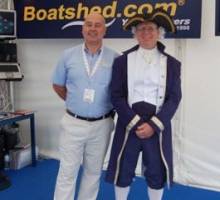 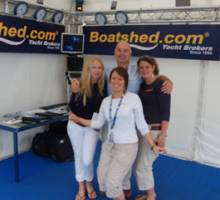